June 22, 2015
NEW DIRECTOR GENERAL: Ann Marie Matheson has been appointed the new Director General of the English Montreal School Board, succeeding Robert Stocker who stepped down last month and now serves as a senior advisor.

Ms. Matheson’s connection to the EMSB dates back to the beginning of her 23 year career in education. As a member of the Student Services Department of the former Montreal Catholic School Board (MCSC), she was directly involved with programs meant to reduce absenteeism and increase student success rates in all high schools, including St. Raphael, St Pius X and Paul VI schools.  For three years, from 2011 to 2014, Ms. Matheson was an EMSB commissioner for Ahuntsic. Additionally, Ms. Matheson served as the International Baccalaureate Program Coordinator at Marymount Academy International in its founding years and was on loan-of-service to the Ministry of Education and had responsibility for the École Montréalaise Program in English schools – 19 of which were in the EMSB.

Most recently Ms. Matheson has worked for the Lester B. Pearson School Board as a principal at LaSalle Community Comprehensive High School. She was also an in-school administrator at  St. Lawrence Academy Junior, Beurling Academy and ECS (Miss Edgar’s and Miss Cramp’s School for Girls). Ms. Matherson is the parent of two children who have attended EMSB schools. As well she served on the Region 3 Parents Committee and Central Parents Committee in 2005.

BALANCED BUDGET: On June 30, the EMSB adopted a balanced budget for the 2015-2016 school year, with revenues equal to expenses at close to $300 million.  The EMSB was able to absorb Ministry of Education (MEESR) budgetary cuts of close to $2 million because of a strong and growing Adult and Vocational Services sector,  as well as a one-time injection of funds from the expected sale of surplus properties for $1 million.

REGIONAL DIRECTORS:  Evelyne Alfonsi, who has been named a Regional Director (East) will take a one year sabbatical effective July 1. Assuming her role on an interim basis will be
Anna Villalta, currently Assistant Director in the Pedagogical Services Department. Ms Villalta, brings with her many years of valued experience as a teacher, a school administrator and, since she joined EMSB, as a board-level administrator.   Pela Nickoletopoulos is  the new Regional Director (West).

GARDENVIEW A BIG WINNER: In the Quebec Federation of Home and School Association’s Essay Contest Famous Family Recipes Essay we congratulate the second prize winner Diego Caporuscio on his essay on Family Reunion Lasagna. Diego’s essay will be published in the fall issue of the QFHSA NEWS and on the QFHSA website under Essay Contests/ Famous Family Recipes/ Winning essays 2015.

In the Quebec Federation of Home and School Association’s Essay Contest Family Treasures Essay Competition the first prize went to Isabella Leo for her story about The Gold Watch and second prize went to Christopher Sedra for his story Shaving Kit.  The winning essays will be featured in the summer issue of the QFHSA News.

In the National Poetry Contest Nehna Patel won first prize for her poem Mmmm Chocolate and Justin Tran won third prize for his poem If I Had Superpowers.  Emma Dankoff received an honourable mention.  Their work has been published. 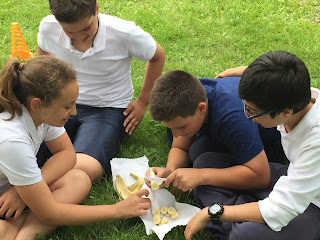 PEARSON TEAMS WITH NESBITT: On Wednesday June 17,  Lester B Pearson High School's Student Council teamed up with Nesbitt Elementary School in Rosemount's Grade 6 classes for a day-long event of workshops and activities. The theme of the day was the transition to high school,
leadership games were prepared to make students more comfortable with the change. The day provided both student groups with a further chance to bond, as we began the year with a camp in October. This opportunity allowed Nesbitt students to ask Lester B Pearson students about high school, who then gave advice, personal experiences and encouraging words throughout the day in hopes to ease their transition and encourage them to be the best they can be in high school.

GRADE 1 TRANSITION: At Merton Elementary School in Côte Saint-Luc, teacher Nathalie Faviere undertook a wonderful project whereby her Grade 1 students welcomed those graduating to the next level from Kindergarten. Here is a link to one student issuing a welcome.